Yes school has finally begun and it’s time for our new term 2 assembly in the hall, I loved Mr Jacobson’s costume it was so unique. His costume was extremely funny and arty. Mr Jacobson was a paint brush and also paint palle. I also liked what Mrs Tele’a was wearing. I also really liked Team 4’s movie. About the Teacher vengers.


Team 5’s  item. Team 5’s item was the very last item out of all of them. They saved the best Item for last. I really liked all the creative costumes the team five teachers were wearing. I thought Mrs Tele’a costume and face paint was the best. I also liked how they made up a race of all the wakas. Hokule’a, Hikianalia, Hine Moana, Te aurere. I was happy Hokule’a won because that’s my house.


My favourite item of all five items was Team 4’s. Because I really liked there movies of Bear Baxindine and all the superheroes. I also liked team 3’s movie. Because it looked like a real movie that is on tv. The outfits team 2 were wearing were really unique. I really liked Miss Eadies costume that was on there movie they made.


I really enjoyed Term 2’s awesome assembly. I thought everyone’s team movies and performances were really fun. Mrs George’s talk was really interesting she was asking everyone questions to win chocolate. Unfortunately I didn’t win any chocolate. The theme for 2016 term , is As I See It.
Posted by Quinlan at 10:19 3 comments:

Last week of term was here. It was time for us to leave camp. All the year 8's were so excited to leave to camp. A few minutes have past and it was time for us to board the bus there were two buses for the year 8's. One bus was really small and was really nice it had air freshener and comfortable seats and it was so quite.  The other bus was big and really loud it was kind of broken at the back the wall of the bus would fall onto you. 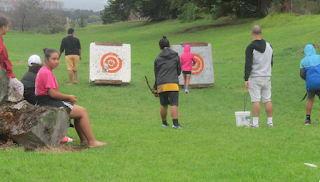 We finally arrived to Camp Marsden I was so excited but that bad new about it was all our bags were sitting outside and it started to rain really hard and all of our bags got wet. After we had lunch it was time for us to see our cabins, I was so happy. Once we got to our cabins we all ran and found the bed we wanted to sleep on. After that we had some fun team challenges in the lounging room. Later on it was time for dinner I was super hungry on the first night we had pasta and mince with cheese with some water. For dessert we had an ice cream sundae. It was super yum. 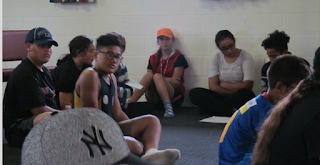 After dinner there was a choice for all the year 8's you got to choose if you want to watch a movie or hang out in the cabins. I decided to watch the movie. About 10 minutes later I started to get bored so I decided to go to the cabins. I saw all my friends in the cabin next to us so I decided to go into there cabins. We all started to eat heaps of candy, It was so delicious. A few minutes later it was time for everyone to go to sleep. The next morning is going to be challenging.

The next morning was the challenging day, where all the groups went and playing there activities. I was in the group One Tree Point A. The people that were in One Tree Point A with me was Ava, Uli, Stevenson Koula, April and Simon. The first activity we did was Archery with Mr Wiseman it was extremely fun. The next activity we did was Cooking with Miss Flavell. Cooking with Miss Flavell was alright. After that was my favorite activity it was the AWESOME, my favorite one was the flying fox, it was the bomb.

Later on after the awesome flying fox was our last activity and that was the cold and fast waterslide, I thought that the waterslide was cool to because I made it all the way to the end. The end of the waterslide was kind of rough on me. It started to get close to the dinner time. On the last night we had butter chicken and rice. For dessert we had mousse. After the delicious dinner it was time for the concert night, my favorite part of the day. First group up was North beach, Then it was One Tree Point and then all the rest. Camp marsden was super fun I enjoyed heaps.